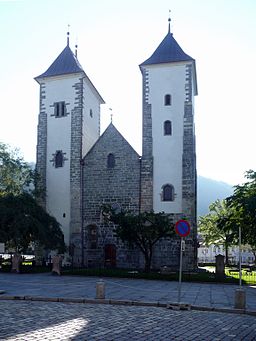 St. Mary’s Church is the only remaining of the twelve churches and three monasteries that were built in Bergen between its beginnings during the reign of Olav Kyrre (1066–1093, traditionally 1070) and the end of the twelfth century. Excavations have revealed the remains of an earlier stone church on the site, but it was probably never completed. Commissioned jointly by the king and the citizens and merchants of Bergen, the construction of St. Mary’s Church began in the 1130s or 1140s. The exact year of completion is unknown, but the church is mentioned in Sverris saga as where the rebels of the Birkebein Party sought refuge when attacked by a peasant army in 1183. St. Mary’s Church is likely to have been built by craftsmen from Scania, then part of Denmark. The church’s style is reminiscent of that of Lund Cathedral in Scania. (wikipedia)

To Be, To Bergen: Some Shakespearian advice to the short stop tourist, on how to create a great day in Bergen!

Bergeners easily interpret Hamlet's famous words "To Be, or Not to Be", according to our local experience: "To Be IN BERGEN, or Not to Be". So, if you are not here already, come! Bergen is a pleasant place to be! We provide cruise tourists and others with some free advice, on things to do in Bergen in one day or a week. Browse our suggested free and budget tourist attractions: Bergen walking tours, Bergen sights, Bergen attractions, activities in Bergen, hiking in Bergen, finding your way in Bergen. In short: Here is how to create a great day on low budget in Bergen—on your own. Good luck!